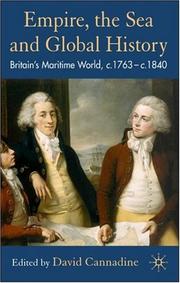 More realistically, this collection is presented as a Victorian companion to David Cannadine’s collection Empire, the Sea and Global History, which covered to Both books began as lecture series designed by the National Maritime Museum, and reflect its current interests in cultural history. "Empires of the Sea" focuses on the war that raged in the Mediterranean from the s to the Christian victory at Lepanto in It takes in the epic siege of Malta in and details the financial and strategic circumstances that drove most of the decision-making on both sides. As history it is sound, both detailed and well by: The Victorian Empire and Britain’s Maritime World, – The Sea and Global History | Miles Taylor | download | B–OK. Download books for free. Find books. The Sea in History - The Modern World covers the nineteenth and twentieth centuries, when the global reach of major powers frequently brought them into conflict with each other, including conflict at sea. The many majors wars at sea of the period are discussed, as are the planning and strategic thinkingof the major powers in cases both where.

List of Illustrations Notes on Contributors 1 Introduction: Maritime Empires in World History Rolf Strootman Part 1 The Middle Sea 2 A Thousand Black Ships: Maritime Trade, Diplomatic Relations, and the Rise of Mycenae Jorrit M. Kelder 3 The “First Athenian Empire”? Athenian Overseas Interests in the Archaic Period Floris van den Eijnde 4 Contested Hegemonies: Thebes, Athens and Persia in. Get this from a library! Empire, the sea and global history: Britain's maritime world, c. c. [David Cannadine;] -- Between the end of the Seven Years war in , and the abolition of slavery within its Empire in , Britain's maritime engagement with the wider world was transformed. The essays in this book. : The Victorian Empire and Britain's Maritime World, The Sea and Global History (): Taylor, M.: Books. During global capitalism's long ascent from –, workers of all kinds—slaves, indentured servants, convicts, domestic workers, soldiers, and sailors—repeatedly ran away from their masters and bosses, with profound effects. A Global History of Runaways, edited by Marcus Rediker, Titas Chakraborty, and Matthias van Rossum, compares and connects runaways in the British, Danish, .